When you book with an account, you will be able to track your payment status, track the confirmation and you can also rate the tour after you finished the tour.
Sign Up
326

Aotearoa has been named as the third most beautiful country in the world, according to an influential travel guide. Rough Guides highlighted New Zealand’s “rolling green hills, majestic mountains, breathtaking fiords and amazing diversity of landscape from one island to the next” as the reason for its high rating.

Auckland, based around 2 large harbours, is a major city in the north of New Zealand’s North Island. In the centre, the iconic Sky Tower has views of Viaduct Harbour, which is full of superyachts and lined with bars and cafes. Auckland Domain, the city’s oldest park, is based around an extinct volcano and home to the formal Wintergardens. Near Downtown, Mission Bay Beach has a seaside promenade.

Paihia, is a town on New Zealand’s North Island. It’s known as a gateway to the dive sites and sandy beaches of the Bay of Islands. At the Waitangi Treaty Grounds, a carved meeting house, a museum and a giant Maori canoe mark the site of the founding of modern New Zealand. A trail leads to the horseshoe-shaped Haruru Falls. Southwest of town, there are panoramic views from the Opua Forest Paihia Lookout Track.

Rotorua, a town set on its namesake lake on New Zealand’s North Island, is renowned for its geothermal activity and Maori culture. In Te Puia’s Whakarewarewa Valley, there are bubbling mud pools and the 30m-tall Pohutu Geyser, which erupts many times daily. It’s also home to a living Maori village and the New Zealand Maori Arts and Crafts Institute, with traditional wood carving and weaving schools.

Lake Tekapo, is a small township located at the southern end of the lake of the same name in the inland South Island of New Zealand. It had 558 residents according to the 2018 census, being one of five settlements in the sparsely populated Mackenzie Basin.

Queenstown, New Zealand, sits on the shores of the South Island’s Lake Wakatipu, set against the dramatic Southern Alps. Renowned for adventure sports, it’s also a base for exploring the region’s vineyards and historic mining towns. There’s bungee jumping off Kawarau Gorge Suspension Bridge and jet-boating on the Shotover and Dart rivers. In winter, there’s skiing on the slopes of The Remarkables and Coronet Peak.

Wanaka, a resort town on New Zealand’s South Island, is set on the southern end of its namesake lake with views of snowcapped mountains. It’s the gateway to the Southern Alps’ Mount Aspiring National Park, a wilderness of glaciers, beech forests and alpine lakes. Treble Cone and Cardrona ski resorts are near the park. Just outside the town is the outdoor maze and sculpture gallery of Puzzling World.

The Franz Josef Glacier, is a 12-kilometre-long temperate maritime glacier in Westland Tai Poutini National Park on the West Coast of New Zealand’s South Island. Together with the Fox Glacier 20 kilometres to the south, and a third glacier, it descends from the Southern Alps to less than 300 metres above sea level

Christchurch, known for its English heritage, is located on the east coast of New Zealand’s South Island. Flat-bottomed punts glide on the Avon River, which meanders through the city centre. On its banks are cycling paths, the green expanse of Hagley Park and Christchurch Botanic Gardens. In 2010 and 2011, earthquakes destroyed many of the historic centre’s stone-built buildings.

We are here in Auckland!  A cheeky visitor to explore, what you got which makes you one of the TOP 10 Cities to Live.  You will be greeted by Freedom Ambassador and that’s it, you are in safe hands for your holiday. We will Transfer you to the hotel for overnight stay in Auckland.  Stay relaxed, get over the jet lag, prepare your back pack for day trip tomorrow and Have a good relaxing night!

Auckland City Tour and Beach Day Out – Sounds interesting isn’t it?  Let’s start the day with iconic One Tree Hill & Mt. Eden Hill, Take a drive through Tamaki drive and see a spectacular view of Bastion Point.  You will be amazed how beautiful Auckland is from the height of Sky Tower when we visit. We will move towards Bay of Islands (Paihia).  Be comfortable at your stay in Paihia tonight.

At Paihia, you will board a cruise which takes you through the hole in the rock located at middle of the ocean.  If you lucky enough and waves are not rough, cruise will pass through the just enough wide hole in the rock.  You might get surprised if dolphins start sailing along with your cruise – keep that camera on all the time.  Cruise will give you the opportunity to land on a Small Island for rest and relax and then back to Paihia.  We will then visit historical Treaty of Waitangi Ground and Haruru Falls in Paihia region. Later leave for Auckland. Check in the hotel. Overnight Stay in Auckland.

We will leave for Rotorua. We will visit Waitomo Caves on our way.  One of the rarest cave full of Glowworms which will remind you of the stars in the sky. Check in the hotel at Rotorua and rest of the evening is free for leisure.  Ask our freedom team, if you want real fun of kayaking and Boating on ROTORUA LAKE. We will relax for the night at Rotorua – a Geo Thermal City of New Zealand.

Leave for Rotorua attractions.  Start from Agrodome, where sheep fur will be shaved live in front of you, Te Puia geyser including very unique Maori Cultural Show.  Later in the noon we will proceed to Auckland and on our way we will relax our eyes at beautiful Hamilton Gardens. Unwind yourself at hotel in Auckland for tonight folks.

Flight to Christchurch. Get ready to have a march with PENGUINS at International Antarctic Centre in Christchurch.  Enjoy the 4D show and will proceed towards Lake Tekapo/Twizel for check in at the Hotel.  Just enjoy the southern air and beautiful scenery on our way to Mt. Cook National Park. We will return to the Hotel for overnight stay @ Lake Tekapo/Twizel

We will head towards Queenstown – a true heaven on earth. Once checked in at hotel, just stay relaxed and take a little walk on beautiful little town shopping market or lake at your own convenience. Feel the love in Queenstown’s Air – It’s definitely there.

We will leave for Queenstown sightseeing. Let’s go to Gondola and see how beautiful Queenstown is surrounded by lake. We will then visit the Iconic Bungy Jumping place, a real breathtaking adrenaline activity you can book through Freedom.  Let’s proceed to little Arrowtown, few kilometers away from Queenstown.  We will visit Gibbston Valley Winery  where you will be able to taste a bit of NZ
wine. Later in the evening we will go to Below Zero Bar.  Stay warm in your jacket and beanie and we will make sure to pull you off those bar table. As tomorrow is busy so can’t allow too much joy at the BAR, hope you co-operate.

We are off to Milford Sound, one of the highly enjoyed road trips by millions of visitors. Few stop over’s for your lovely pictures and amazing sightseeing and then Milford Sound Cruise in the afternoon.  We will stop at half way to Queenstown in a little gem town named Te Anau for overnight stay.  You will realize why we not going back to Queenstown when you will have a relaxing evening to memorize the wonderful day you had.  No harm if you sit and loosen up at beautiful Te-Anau  at your convenience.

We will leave for Wanaka.  Aaha! can’t forget shopping on the way to Queenstown, honestly all holiday purpose defeats if women with you can’t do SHOPPING! We will then pass by Crown Range Scenic Drive and when at Wanaka, let’s challenge you at Puzzling World – Be Brave enough to test your IQ with sense of humor.  If time permits it’s a good idea to take a walk at beautiful Wanaka Lake and then have a relaxing night at  Wanaka.

Off we go to Glacier Region via Haast Pass. At Glacier Region (Franz Josef& Fox Glacier) we will visit Glacier Lookout Point- honestly, it’s a great memory you going to bag today. Overnight stay at little chilly Franz Josef/Fox Glacier, keep yourself warm.  By the way, ask Freedom Team if you want to book a Helicopter Ride at Glacier Region – a must recommended activity.

We will leave for Christchurch.  Till now, you have seen New Zealand- by road, flight and can’t let you leave New Zealand without Tranz Alpine Train Journey from Greymouth – Christchurch. It says’ seeing is believing, so you need to experience this and believe us.  Overnight Stay in Christchurch – The Garden City of  New Zealand

Departure for your Home Country. 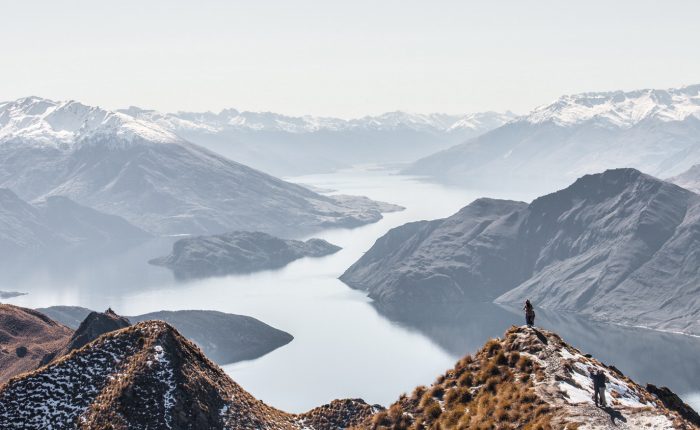