When you book with an account, you will be able to track your payment status, track the confirmation and you can also rate the tour after you finished the tour.
Sign Up
251

Bali also known as the island of God, is magical. As probably one of the largest tourist destinations and the most famous island in Indonesia, Bali blends spectacular mountain scenery and beautiful beaches with warm and friendly people, a vibrant culture and out of this world resorts. It is well-known for its highly developed arts, including modern and traditional dance, painting, metal working, music and sculpture. When on Bali Holidays, you get to witness the secluded coves, pristine white beaches and the beautiful terraced green paddy fields. With Bali Tours Packages, visitors can also experience the Balinese dance and music. Bali’s white beaches are favourite for family holidays. There are a variety of water sports available, such as banana boats, parasailing or jet skiing, swimming or plain sunbathing. Cruises to the surrounding islands can be taken from here as well as submarine dives to watch the tropical underwater life from within safe compartments.

Bali is a part of Indonesia and therefore still subject to all the opportunities and challenges that a developing country is facing in this very dynamic time. Although Bali is pretty safe and easy to travel, a lot of things simply don’t work the way you are used to. Well, that’s part of the fun, isn’t it. Bali is a budget backpacker paradise. It’s one of the most popular destinations in Indonesia and a hub for travelers, yoga lovers, honeymooners, and digital nomads alike. As one of the most popular tourist destinations in Southeast Asia, thousands of people arrive here annually for an amazing vacation.

Arrival at Denpasar; Ngurah Rai International Airport – The capital of one of the most exotic destinations in the world. Complete your immigration formalities & proceed to the arrival hall. Meet our local representative with a complete traditional welcome. Transfer to hotel. Overnight at the Hotel.

Breakfast at the hotel. Today you will explore the Bedugul area to visit the Ulun Danu Temple – a beautiful temple on the banks of Beratan Lake. The weather here is very pleasant. Thereafter proceed to most photographed monument of Bali – the famous Tanah Lot Temple – built on the top of a rock in the ocean. Tanah Lot temple was built in 11th century, supposed to be the Golden age of Hinduism in Indonesia. Experience one of the most
awesome sunsets in the entire Indian Ocean at this site.

Second day in program we will do the Full Day Ubud Kintamani Tour tour, before start the trip you will enjoy breakfast at hotel first and then our driver will pick up at hotel and we directly start the journey to explore interesting place feautured in this packages. First visit will be watching the traditional Barong dance performance at batubulan village, is interesting dance with amazing story about fighting good and evil also know as a trance dance. Then we continue to visit Celuk village to see the traditional gold and silver smith which made by local people in this village, then visiting Tirta Empul Temple at Tampak Siring also known as Holy spring temple, is local hindu temple with holy spring water inside the temple, and then we directly go to Kintamani village for see the amazing view of mount batur volcano and lake batur from distance, and you will have lunch in this kintamani village, while lunch you also can see beautiful view of mount batur, after lunch finish we continue the tour for visit visit the Tegalalang rice terrace in northern ubud, is beautiful rice terrace in small valley, then last site is visiting ubud monkey forest in the center of Ubud. Then we will go back to hotel with bring a wonderful moment during this tour packages.

Breakfast at the hotel. An ideal Bali holiday is incomplete without Bali water sports at the famous Tanjung Benoa beach. This beach best known for its aquatic adventure is located in the Benoa peninsula far away from the hustle & bustle. North of Nusa Dua this beach offers a wide range of water sports. Please check with our representatives for all the water sports information. Many shacks & restaurants lined up along the beach make sure that your tummy is full & you enjoy the most. A great southern Bali trip in the evening introduces you to the heart of southern part of the island. The beautiful Uluwatu temple, built on the top of a cliff about 825 feet high facing the vast deep blue Indian Ocean also offers a wonderful view of the sunset. Overnight at the Hotel.

Breakfast at the hotel. First half of the day at Leisure. There’s no better way to spend a balmy tropical evening than on a beautiful evening Dinner Cruise. As the sun goes down you set off on a relaxing cruise around the harbor. Take in the cool night air on the top deck, be entertained by live musical entertainers at the bridge deck, savour a delicious international buffet dinner, then dance the night away at the disco or enjoy our live cabaret show onboard. It is definitely a treat for all age groups especially the honeymooners. All in all a memorable evening at the Sunset dinner cruise will always make you nostalgic in the future. Overnight at the Hotel

Breakfast at the resort. For animal lovers a trip to Bali is not complete without visiting Bali Safari & Marine Park. This Park is located in Gianyar and showcases many of Indonesia’s protected wildlife with their natural surroundings and environment. This amazing wildlife includes the conservation projects for the Sumatran Tigers and many other forms of wildlife from both the land and the waters of Indonesia. The wildlife showcased here features the genuine Balinese culture with temples and traditional style huts and buildings around the park that produce an excellent, well balanced tourist attraction portraying both traditional Balinese culture and safari style with the amazing animals of Indonesia. Designed for animals to live in a natural habitat, this park however also allow you to get closer to them than you ever thought possible. Have the chance to cuddle a baby orangutan, tiger, lion or leopard. Observe and get up close to over 60 different species as you enjoy a safari journey, on a
tram, straight through animal enclosures.

Breakfast at hotel, then get morning pick up from your hotel and take you to visit Lempuyang Temple is one of Bali’s oldest and most highly regarded temples. It is also believed to predate the majority of Hindu temples on the island, and the six holiest places of worship on Bali. The entire landscape looks very picturesque from this temple gate, and that gate also known to the western world as “The Gates of Heaven”. The gates and its temple located in eastern part of the of Bali within the highlands of Mount Lempuyang, which sitting at a cool 1,775m above sea level. The whole complex is made up of seven different sanctuaries, this temple offers visitors one of the most breathtaking views from any of the temples in Bali.

Next stop at Tirta Gangga Water Palace locally known as Taman Tirta Gangga, is a former water palace of Karangasem empire which one of east Bali’s most famous sights. Situated about 6 Kms. north of the town of Amlapura, which feature 1.2ha of pools, ponds and fountains surrounded by tropical gardens. Breathtaking scenery with lush rice paddies back three levels of ornamental gardens with swimming pools, fountains, stone carvings, stepping stones, fish ponds, and airy pavilions.

After lunch we will take you to Pura Goa Lawah is one of the unique and most picturesque temple in Bali. It features a complex built around a cave opening that is inhabited by hordes of bats, and its name translates to ‘Bat Cave Temple’. This temple was established in the 11th century by Mpu Kuturan, one of early priests who laid the foundations of Hinduism on the island.

At the end of the day head you to Kertha Gosa is an historical landmark in Semarapura, which forms part of the Puri Semarapura royal palace complex. Complex and features two main structures – a grand hall or the namesake Bale Kertha Gosa with ceilings filled with Kamasan or wayang-style paintings, and the Bale Kambang ‘floating’ hall or pavillion that’s surrounded by a moat. Features spacious and open halls inside a walled compound. Unique and traditional Balinese architecture can be seen throughout the gates, walls and main structures.

Start your day with convenient pickup directly from your hotel and escorted you to Sanur Port for your speed boat Nusa Penida Island. Once you arrive at Nusa Penida port you will be greeted by our friendly driver, then take you to Broken Beach locally name Pasih Uug is a lovely 360 degree limestone formation with a cut through arch in between which lets the waves in. It has big natural pool, with about a hundred meters in diameter, created by sea abrasion and collapsed limestone hill in million years ago. This hole has 98 meter in diameter and offering unique and scenic view. Uniqueness, a tranquil and incredible scene, which is a great spot for travel photographers and panoramic view seekers.

Next we will take you to Angel’s Billabong often called Angel of Nusa Penida which located within 5 minutes from Broken beach. This is another incredible spot with unique limestone formations. The naturally formed rock lagoon offers a scenic seascape. Angel’s Billabong is natural infinity pool is framed by rock cliffs and hangs out over the ocean overlooking Manta Point Beach.

After that we will take you to Kelingking Beach also known as Kelingking Secret Point Beach which top destinations on Nusa Penida.  An incredible hidden beach which framed by towering, steep cliffs, deep turquoise blue waters further embraced by powdery white sand with the most amazing view like heaven on earth. The secluded beach itself is down a rugged 400m cliffside hike, however the view of Kelingking is arguably more popular than the beach itself. From the viewpoint, visitors look down onto the white sand enveloped by the famous limestone headland that reaches out into the Indian Ocean. Where the viewpoint that is hard to believe that it’s real, when you see it for the first time, and 100% guranteed the most spectacular place you will have ever seen. Enjoy walking around and let your foot sense the magic sand before your driver transfer back to the port and escort you to the boat to go back to Sanur. Arrive back in Sanur, the driver will escort you to the hotel.

Breakfast at the hotel. Check out from of the hotel. Proceed to the airport for your flight.

What are the General Conditions & Remarks? 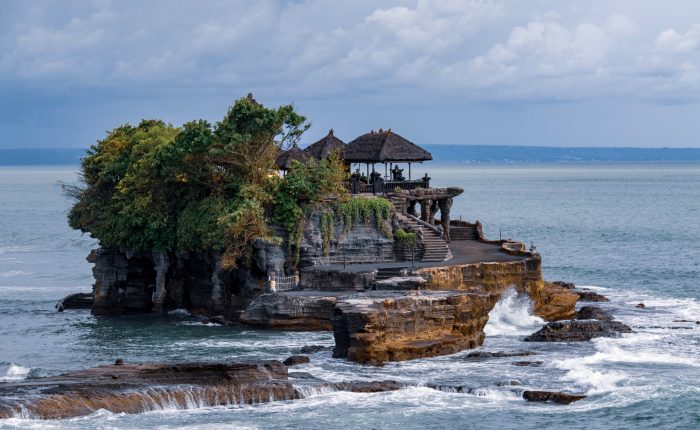 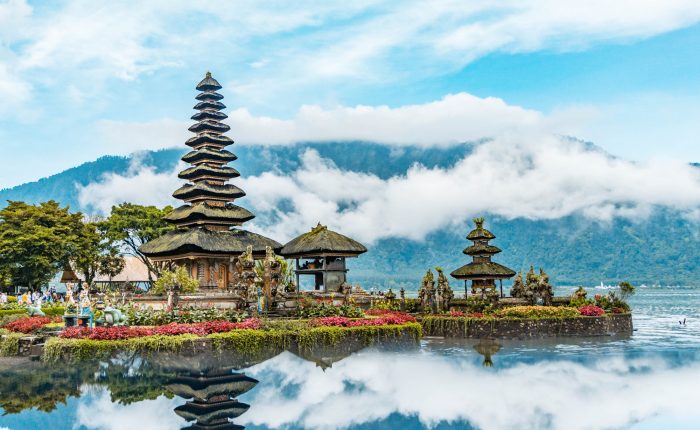