5 day Culture & Nature Authentic features 2 major tourist destinations in Laos to discover the untouched side of the country with the modern world. Start in the charming Luang Prabang on this short but delightful tour. See gilded Buddhist temples, faded French architectures, marvel at treasures in the Royal Palace Museum, and join pilgrims at the sacred Pak Ou Caves. Highlight of this trip, you’ll spend time on experiencing the traditional rural lifestyle and try your hand at some farming activities in an organic farm. Top the tour off by chilling out in the cool menthol blue waters of Kuang Si cascades. Your journey will finish in Vientiane, the capital city of Laos still remains its colonial yesteryears with numerous historical landmarks. On this trip, you not only explore some popular temples but also visit an orchid farm and enjoy lunch on a boat along a river.

Vientiane, Laos’ national capital, mixes French-colonial architecture with Buddhist temples such as the golden, 16th-century Pha That Luang, which is a national symbol. Along broad boulevards and tree-lined streets are many notable shrines including Wat Si Saket, which features thousands of Buddha images, and Wat Si Muang, built atop a Hindu shrine.

Arrival airport, please go to custom desk as your first point of entry to get visa-on-arrival into the country and pay stamping fees directly by cash to custom office there then guide will pick you up outside and transfer to the city for check in

On arrival at the airport, you will be met and transferred to check in the hotel. After a soft rest, we visit to the magnificent Wat Xiengthong – the most beautiful temple in Luang Prabang with its mosaic decoration and the former royal carriage. We still have time to visit the Royal Palace Museum, which hosts a range of interesting artifacts. If time permits, we will take a stroll around the city to visit Big Brother Mouse, which is the most famous bookshop in Laos. The next stop is Ock Pop Tock, meaning East Meets West, where you can learn about the traditional weaving in Laos. Our tour would be incomplete without climbing up Mt Phousi overlooking the city of Luang Prabang for a beautiful sunset before passing by the night market, where you can find a lovely collection of handmade textiles made by local and hill-tribe people surrounding Luang Prabang.  Back to your hotel Optional: Enjoy a private Baci ceremony after sunset at a local family. The Baci ceremony as a traditional ritual of the Lao people expresses the spirituality of the country and is a highly memorable experience and a deep insight into Lao culture for the participants.

An optional early start gives you the fantastic opportunity to participate in the daily morning rituals of saffron-clad monks collecting offerings of Alms (ubiquitous sticky rice) from the faithful residents. This tradition is very unique in Laos, being the only Buddhist nation still preserving the procession. From here, we visit local market near the Royal Palace where you can find anything from fresh vegetables, rice, streamed fish, frogs and many other things. This is an opportunity to get a real flavor of the local culture. We then embark on the a leisure cruise upstream on the Mekong River, which also gives us a breathtaking view of the tranquil countryside, before reaching the mysterious Pak Ou Caves, two linked caves crammed with thousands of gold lacquered Buddha statues of various shapes and sizes left by pilgrims. Along the way, we stop at the village of Ban Xanghai, where they make the local rice wine. We also visit the local villages at Ban Chan. These villages have specialized in manufacturing and selling products made from silk and Saa paper for many years ago. You’ll see different kinds of Laos’ traditional crafts. Return to your hotel.

In the morning, your guide and driver will take you to Elephant Village. On arrival, the Camp Manager will welcome and greet you and brief shortly about the village. After, enjoy the impressive experience of approx. 30 minute elephant ride on the Howdah – the name of Elephant seat, you will then take boat trip to the nearby jungle. We then drive to Kuang Si Falls, located 30 kilometers south of Luang Prabang. The many tiered waterfalls have scooped out small basins of turquoise color. You can cool off with a refreshing swim in the pools and hike around the falls if wanted. You’ll also visit the Kuang Si Falls Butterfly Park, one of the must-visit spots, newly opened on January 2014. Return to Luang Prabang and on the way back a stop will be made at one of the local villages before getting to Wat Siphouthabath to admire the sunset.

Upon arrival enjoy a guided tour to discover the hidden charms of Vientiane. Vientiane is one of the quietest capital cities in the world, far away from the bustle and hustle of other Asian capitals. We today explore Vientiane including some main temples such as Vat Ho Prakeo used to be the house of the Emerald Buddha and Wat Sisaket crossing the street and where more than ten thousand of Buddha images are being placed. We continue to Pratuxai, it was Arc the Triumph of France. Afterwards, visit COPE, an association working to help landmine victims. A visit to the center provides in-depth information about the history of the American/Vietnam war and the lasting impact of unexploded ordinances (UXO) in the area and the efforts underway to clear them. Afternoon, we continue to visit Lao Revolutionary Museum where you’ll learn and get to know what happened during the French colonial time, and during the reign of the King Anou and Chao Fa Ngum. Visit Ban Nong Bouathong the weaving village, to get to know how people feed worms for the silk and lots of the Lao textiles. Next, we’ll take you to That Luang, the holiest site in Laos. Constructed by King Setthethirat in the 16th century, the temple is resplendent as the sun is shines upon its towering golden spire. End your tour of the capital along the banks of the Mekong River as the sun begins to set. Stroll along the river, stop to enjoy a cold drink, or sample a snack from one of the many local food stalls if wanted.

Morning, we continue to visit Wat Si Muang, which is very famous for its supernatural power. Next, we transfer about 45 minutes away to visit Buddha Park known which is known as Xieng Khuan, this unusual park is filled with over 200 Buddhist and Hindu statues. Stroll around the Park, you feel the quiet and tranquil setting along the Mekong River a contrast to the slightly eccentric sculptures which were built in 1958 by a Laos’s shaman. The concrete sculptures are bizarre but intriguing, sitting majestically in the peaceful park. Afterward, we drive back to Vientiane. En route, a short stop is made at Mai Savanh to explore the traditional textiles of the Lao people. This shop specializes in high quality silk products and involves several families in their process, from the northern province of Luang Nam Tha Province and the southern provinces of Attapeu and Sekong. (Note: Mai Savanh is closed on Saturday & Sunday) We will then transfer out to the airport to take the departure flight 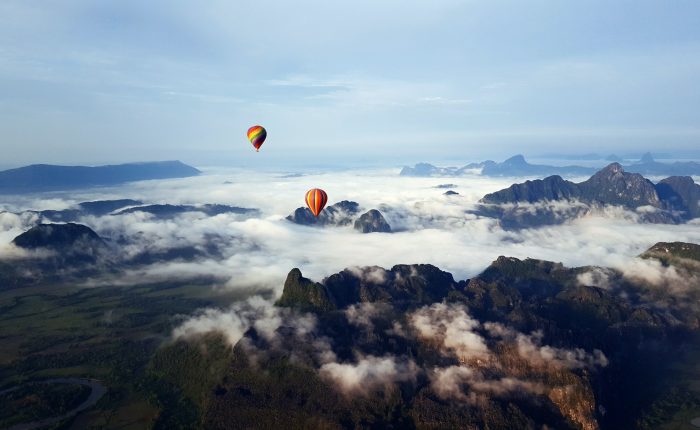