Blessed with scores of natural treasures, South India always entices travelers from different nooks and corners of the globe. Some of the best gems in the treasure trove of South India are Coorg, Wayanad, and Ooty. Resting in the lap of Mother Nature, these three are very beautiful hills stations that allure visitors with their charm. On one hand, the hilly slopes catch your eyes, and on the other hand, the dazzling lakes cast a spell.

We have designed a 6 nights and 7 days travel package that takes you to every popular tourist spot of Coorg, Wayanad, and Ooty. So what are you waiting for? Discover the life and lifestyles of South India on this trip. It’s beautiful!

Mysore, (or Mysuru), a city in India’s southwestern Karnataka state, was the capital of the Kingdom of Mysore from 1399 to 1947. In its center is opulent Mysore Palace, seat of the former ruling Wodeyar dynasty. The palace blends Hindu, Islamic, Gothic and Rajput styles. Mysore is also home to the centuries-old Devaraja Market, filled with spices, silk and sandalwood.

Madikeri / Coorg, is a hill town in southern India. Framed by the Western Ghats mountain range, it’s known for the Raja’s Seat, a simple monument overlooking forests and rice paddies. In the center, the 17th-century Madikeri Fort features 2 stone elephants at the entrance. Nearby, the domed Omkareshwar Temple is dedicated to the Hindu deity Shiva. To the northwest, cascading Abbey Falls is surrounded by spice plantations.

Wayanad, is a rural district in Kerala state, southwest India. In the east, the Wayanad Wildlife Sanctuary is a lush, forested region with areas of high altitude, home to animals including Asiatic elephants, tigers, leopards and egrets. In the Ambukuthi Hills to the south, Edakkal Caves contain ancient petroglyphs, some dating back to the Neolithic age.

Ooty, (short for Udhagamandalam) is a resort town in the Western Ghats mountains, in southern India’s Tamil Nadu state. Founded as a British Raj summer resort, it retains a working steam railway line. Other reminders of its colonial past include Stone House, a 19th-century residence, and the circa-1829 St. Stephen’s Church. Its 55-acre Government Botanical Garden lies on the slopes of Doddabetta Peak.

Kodaikanal, is a hill town in the southern Indian state of Tamil Nadu. It’s set in an area of granite cliffs, forested valleys, lakes, waterfalls and grassy hills. At 2,000 meters above sea level, the town centers around man-made, star-shaped Kodaikanal Lake, bordered by evergreen forest. Rowing boats can be hired, and hikers and cyclists follow the 5k Lake Road path around the shore.

On Arrival Transfer to Hotel  Bangalore is the capital city of Karnataka state known as Garden city or Silicon Valley of India. city tour of Bangalore visit Lalbagh Botanical Gardens, Cubbon Park, ISKCON Temple, Vidhana Soudha and finally at you will be taken to the Commercial Street for the Shopping. Evening, return to the hotel and overnight stay at hotel.

After Breakfast  proceed to Mysore, en-route visit Srirangapatna, a historical place. Afternoon at Mysore. On arrival at Mysore, check in to the hotel. Then visit to Mysore Palace, one of the prime attractions of Mysore city and visit to Mysore Zoo, where you can view some of the rare species of wildlife. Evening visit to world famous Brindavan Gardens (KRS) expanded over 150 acres. The musical fountain and light show adds attraction to the garden. Then return back to the hotel and over night stay at Hotel.

After breakfast, check out the hotel and drive to Coorg. Enroute, visit to Bylukuppe Tibettian Settlement (Golden Temple), a largest Tibetan settlement in India located near Kushalanagar in Kodagu district. The settlement set up in 1960 holds a several monasteries and temples of all major Vajrayana (Indo-Tibetan Buddhist) lineages. On arrival at Madikeri, check in to the hotel. Evening proceed to visit Abbi waterfalls, then to Omkareshwara Temple – a temple having both Islamic and Gothic style of architecture. Then proceed to Raja Seat – a seasonal garden of flowers and artificial fountains. You can view the beautiful view of mountains of Coorg from here. Return to the hotel and overnight stay at the hotel.

Morning, after breakfast, full day free for sightseeing at Coorg. First, visit to Dubare Elephant Camp, a forest camp on the banks of the River Kaveri where bathing and feeding the elephants are done. Dubare elephant camp in Coorg is the perfect destination to enjoy Elephant rides and bird watching. Afternoon, proceed to Talacauveri – located in the picturesque location of Brahmagiri hills. Talacauvery is the origin of River Kaveri, a beautiful Talacauvery Temple built around it, Climb Brahmagiri peak and then visit to Bhagamandala. Bhagamandala is famous for the confluence of the three sacred rivers, Kaveri, Sujyothi and Kanike. Visit to the temple dedicated to Bhagandeshwara (Lord Shiva) and get the blessings. Return to hotel and overnight stay at Hotel.

After breakfast, proceed to Wayanad, upon arrival check in to the Hotel. Later proceed for a sightseeing Tour of Wayanad – Enroute visit The Edakkal Caves (a prehistoric shelter made of natural rock formation), Soochippara Water Falls. Overnight stay at the Hotel/Resort in Wayanad.

After breakfast, proceed to Wayanad remaining sightseeing. You can visit Manathavadi city or vythiri. Best things to experience is below.

Other options to visit if time permits:

Overnight stay at the Hotel/Resort in Wayanad.

Today you are proceeding to Ooty. Ooty is the city and Coonoor is the village. Before reaching Coonoor, you can visit Botonical garden in Ooty, Ooty lake etc.  Arrival and transfer to Hotel. Overnight in Hotel.

You have enough time to see Ooty today. Below are some of the interesting places in case you like to explore.

Dolphin Nose
Dolphin’s Nose around 10 km. away from Coonoor is an excellent viewpoint. It encompasses the Catherine Falls. Lambs nose is another point on the way to Dolphins Nose.

6th & 9th Mile (Shooting Spot)
It takes 9miles from the Ooty city you can reach this spot. Its green & very lengthy shooting spot which is surrounded by forest & mountains. This place is called as “Shooting Medu”. Very calm place and very good for picnics. Dont miss to take your family to Shooting medu.

Rose Garden – Centenary Rose Park
Centenary Rose Park is situated in the heart of Ooty town and it is located less than a km from Charring Cross at Vijayanagaram, the rose garden is laid on 10 acres of land. This garden has been beautifully laid out in terraces with rose tunnels, pergolas and bowers with rose creepers.

Pykara Lake/ Pykara Boat House
The placid lake of Pykara, amid the lush green valleys is a lovely getaway from Ooty. Here, a calm lake is surrounded by forests. There is a forest rest House at Pykara. A boat house by the Pykara falls and Dam is added attractions to the tourists. The major attraction of this place is the boathouse, with restaurant and a rest house to provide you with ultimate comfort. It is a clean and scenic lake in between the hills. It is an isolated lake free from pollution and maddening crowed. Boating is conducted here.

After the breakfast, drive to Coonoor for sightseeing, the place surrounded by the tea plantations. The tourist attractions of Coonoor include Pasteur Institute established in 1907. Sim’s Park is the place where individual tree specimens are planted all over the place, providing an extraordinary attraction to the park. Lamb’s Rock is 8 km from Coonoor and on the way to Dolphin’s Nose. It offers a striking view of the Coimbatore Plains. Laws Falls is an amazing picnic spot and heaven for Nature lovers, located at Coonoor-Mettupalayam road. Proceed to Kodaikanal over night stay.

After the breakfast, Kodaikanal Sight seeing  Silver Cascades, the most attractive and famous waterfall in Kodaikanal. The major attractions of Kodaikanal are the Kodaikanal Lake, a artificial lake. You can enjoy Rowing boats, Pedalling boats, Public ferry as well as Horse riding. Coaker’s Walk where one can have fantastic places of interest such as Dolphin’s Nose in South, Valley of the Pambar river in South East, Bird’s eye view of Periyakulam. Pillar Rocks are three granite boulders that are seen standing vertically shoulder to shoulder vertically measuring to a height of about 122 meters, offering a attractive view. Neptune’s Pools are a series of crystal clear rock pools, created by a stream that runs via pine forests. Return to the hotel and overnight stay at the Hotel.

After the breakfast, check out the Hotel and proceed to the Railway Station or Airport at Coimbatore.

Board your Flight or Train with delightful memories Tour ends. 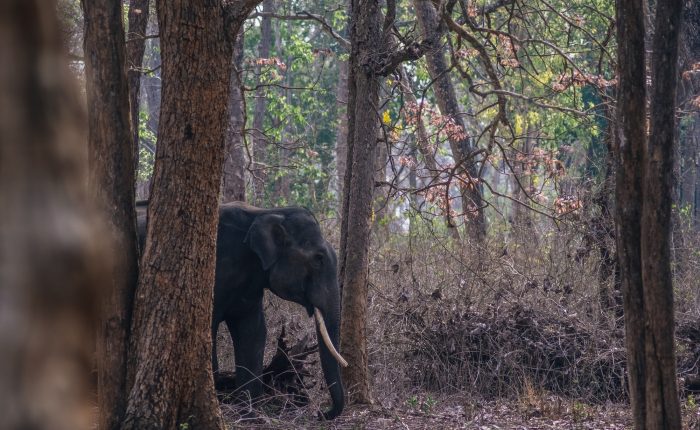 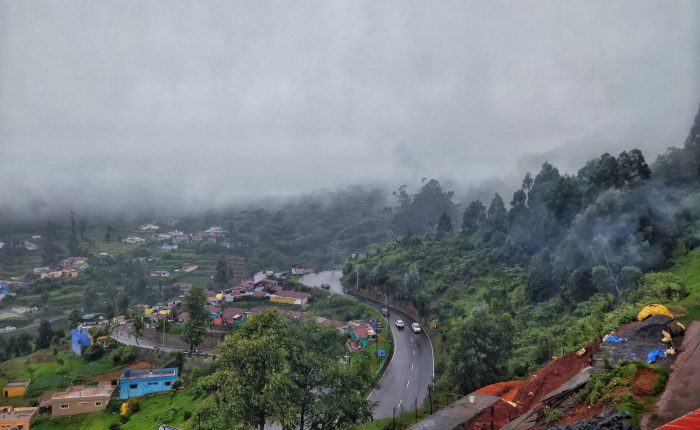